This ras el hanout beef stew with dried apricots is a great option for a large dinner party or a meal that will last one or two days. It is easy to make, tender and very flavoursome.

Meat is ok, but with moderation

Since the beginning of 2016 my boyfriend and I have decided to reduce out meat intake and eat mostly vegetarian food. While at first we were not very strict about it, we realised that not only did we feel better eating less meat, but that, in reality, we didn’t really need it on a regular basis. Of course this puts a lot of pressure on the meat dish I am preparing, and while most times I love to indulge in a nice homemade gourmet burger (like this venison one or this very decadent one), this time I decided not to. 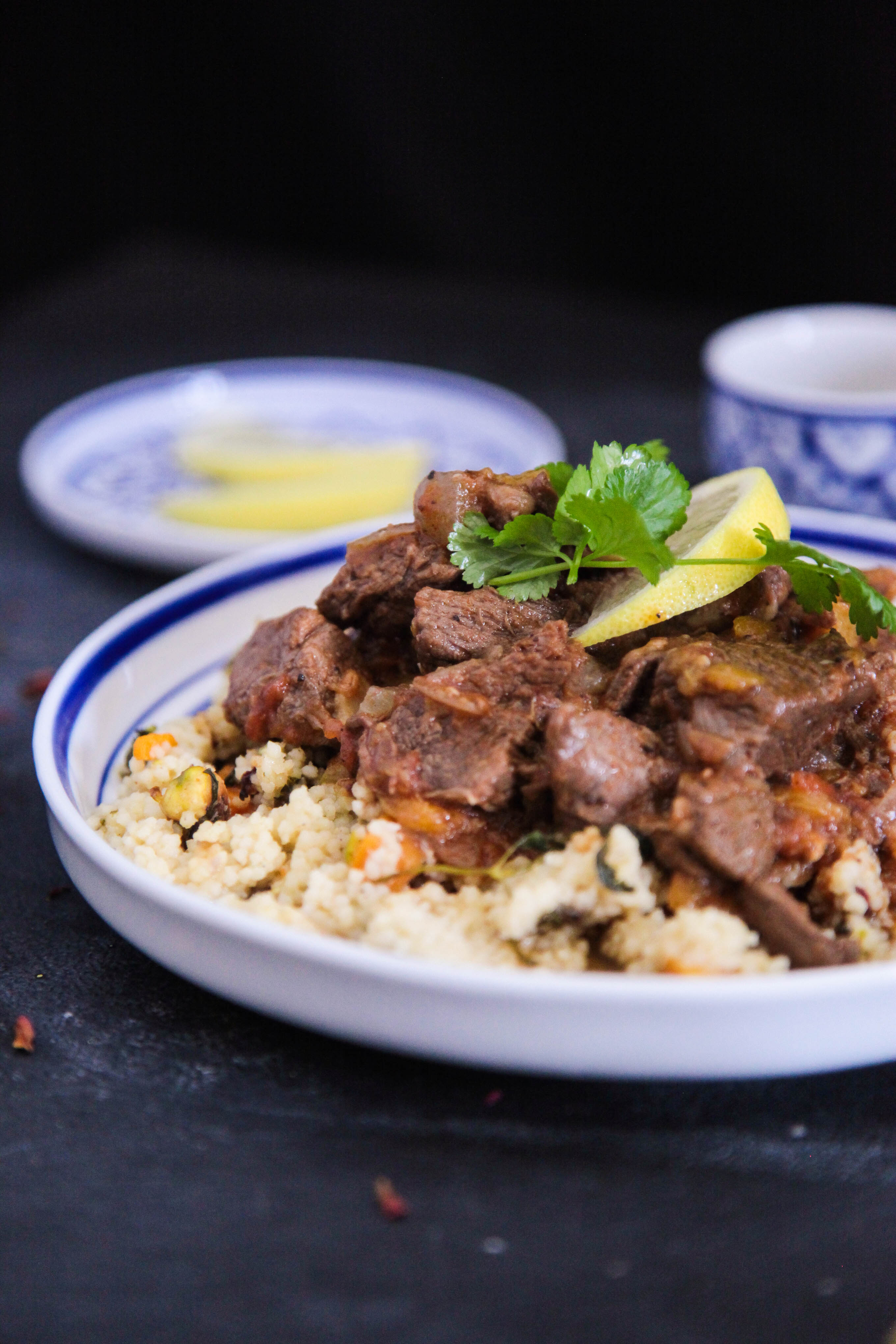 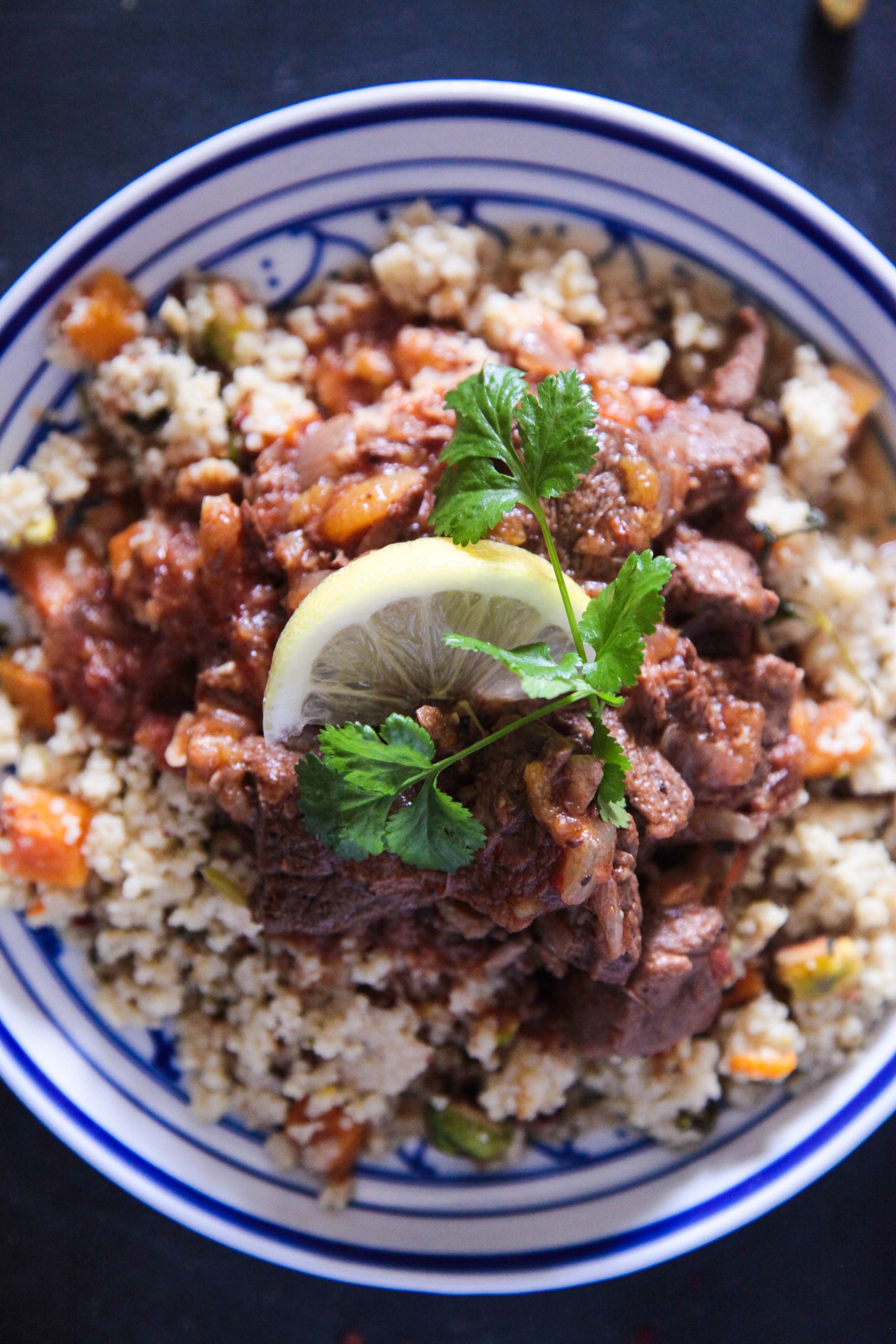 I am really lucky to have two butchers that are very close to where I live. This makes buying meat a pleasure. When I first moved to the UK, I was buying meat from the supermarket. With time I started really disliking it. I always felt that supermarket mince, no matter what, had a really bad flavour, no matter how well I was cooking it. And now, honestly, with two butchers around, why would anyone buy their meat from the supermarket?

I feel like a lot of prejudices turn around prices, but in reality, the meat that I get from the butcher is really not that much more expensive than the one in supermarkets; it’s also locally sourced.  Therefore, not as full of antibiotics and all sorts of drugs. Plus, it makes me feel good to support the very local economy. 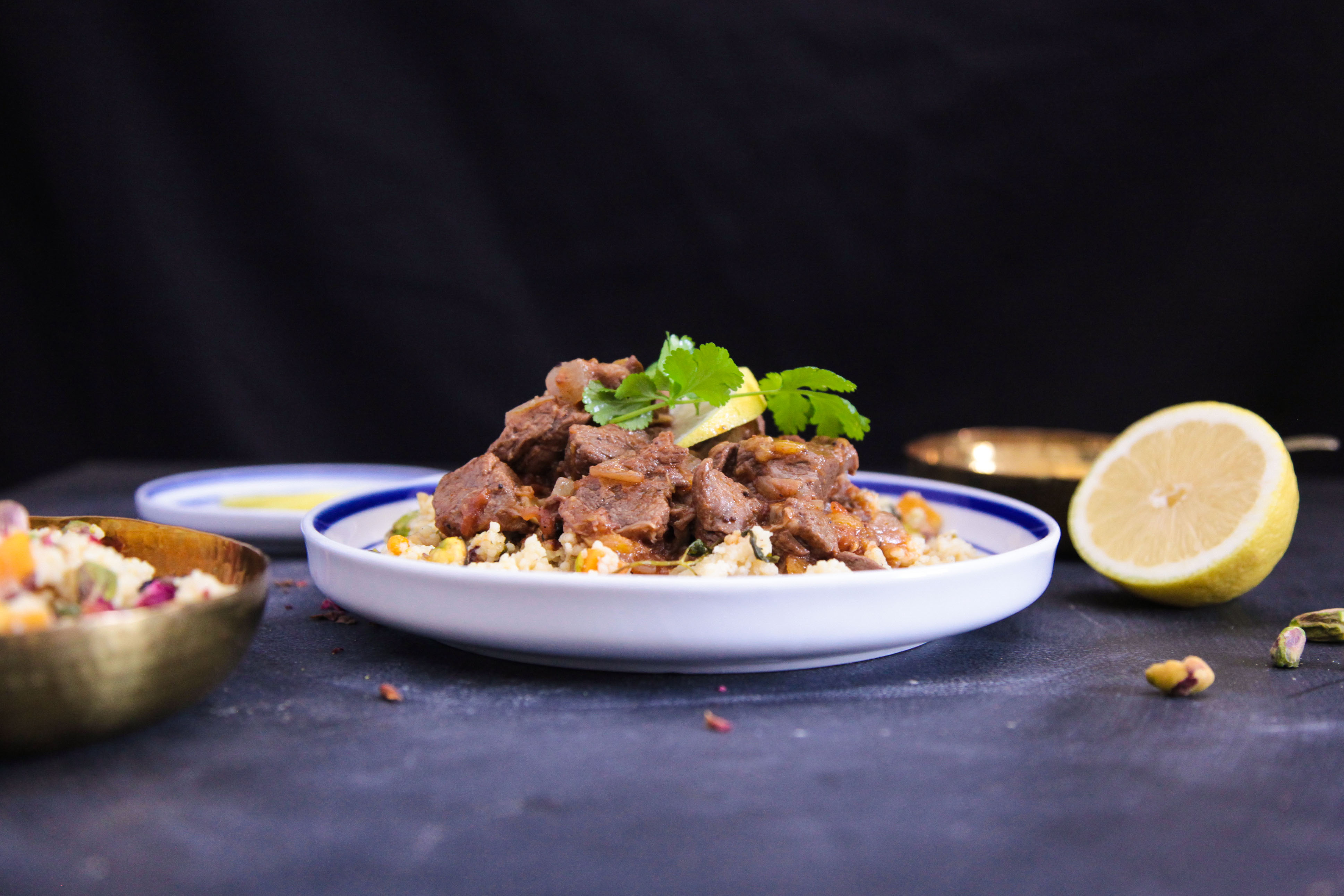 When I bought the 1kg of stewing beef for this dish I made an entirely compulsive decision. I had just met up wit a friend of mine and wanted to get some meat before the butcher closed. We were talking, as we walked in. The butcher asked me what I wanted, and I pretty much had about 5 seconds to decide. Yes, I was also in the middle of my sentence, my head was not very focused on the meat. I just asked for the first thing that popped into my mind and that was not mince.

When I got home, I had to decide on what to make, as I didn’t really have a plan, like I usually do. I surfed Pinterest and FoodGawker for some inspiration, and then remembered the chicken stew my boyfriend had at a restaurant not so long ago. It was at Pera, the Turkish restaurant that previously inspired me for these spinach and kale baked fritters. I didn’t really remember Max’s dish very well, but all I knew was that it contained dried apricots, which in my head tastes absolutely amazing next to a beef stew. I googled the idea and came across a bunch of Moroccan recipes. Later I put together my own recipe and started cooking.

I had this stew with this delicious ras el hanout coriander couscous. The combination was a definite win, so I recommend you try it out if you are planning on making this stew. 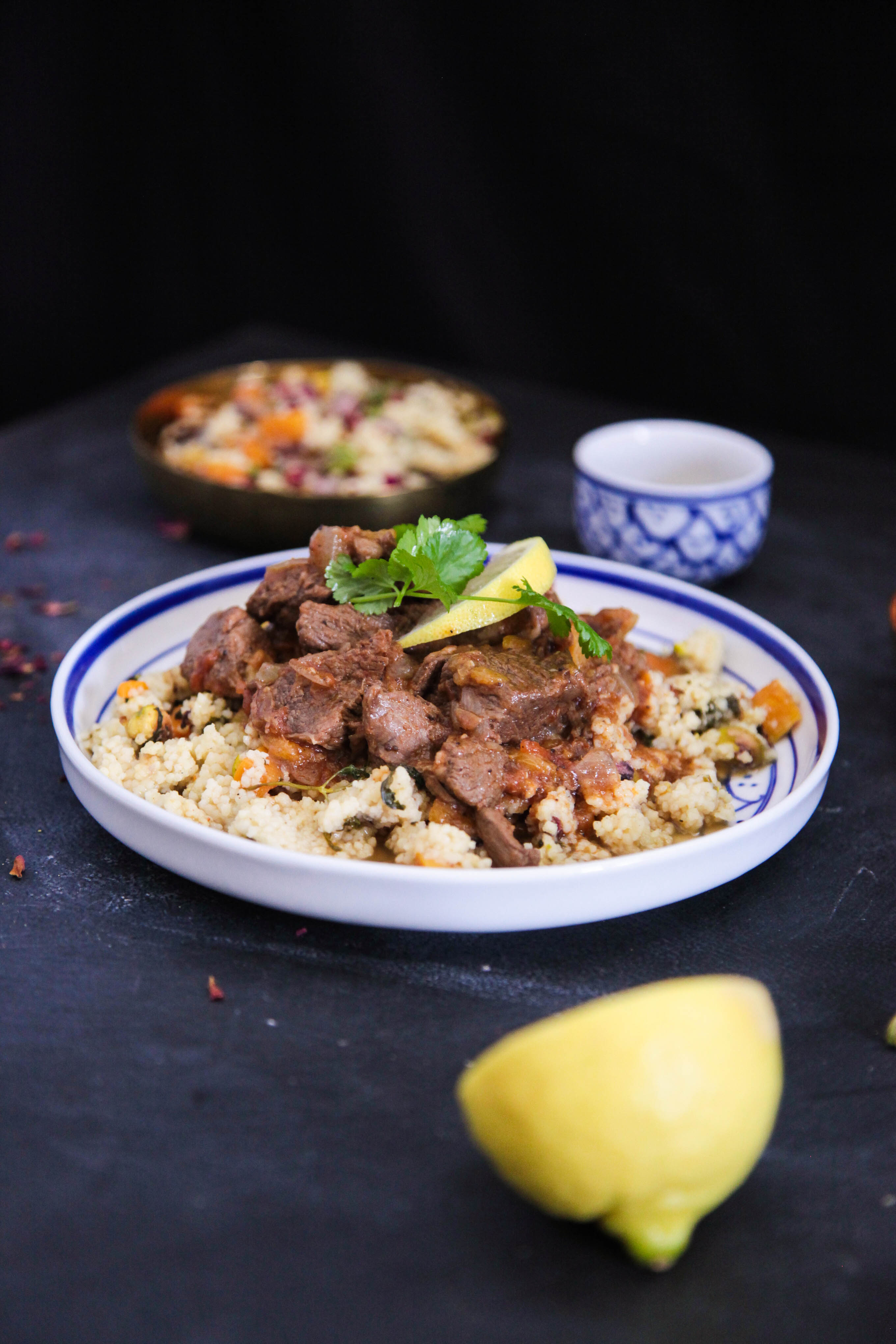 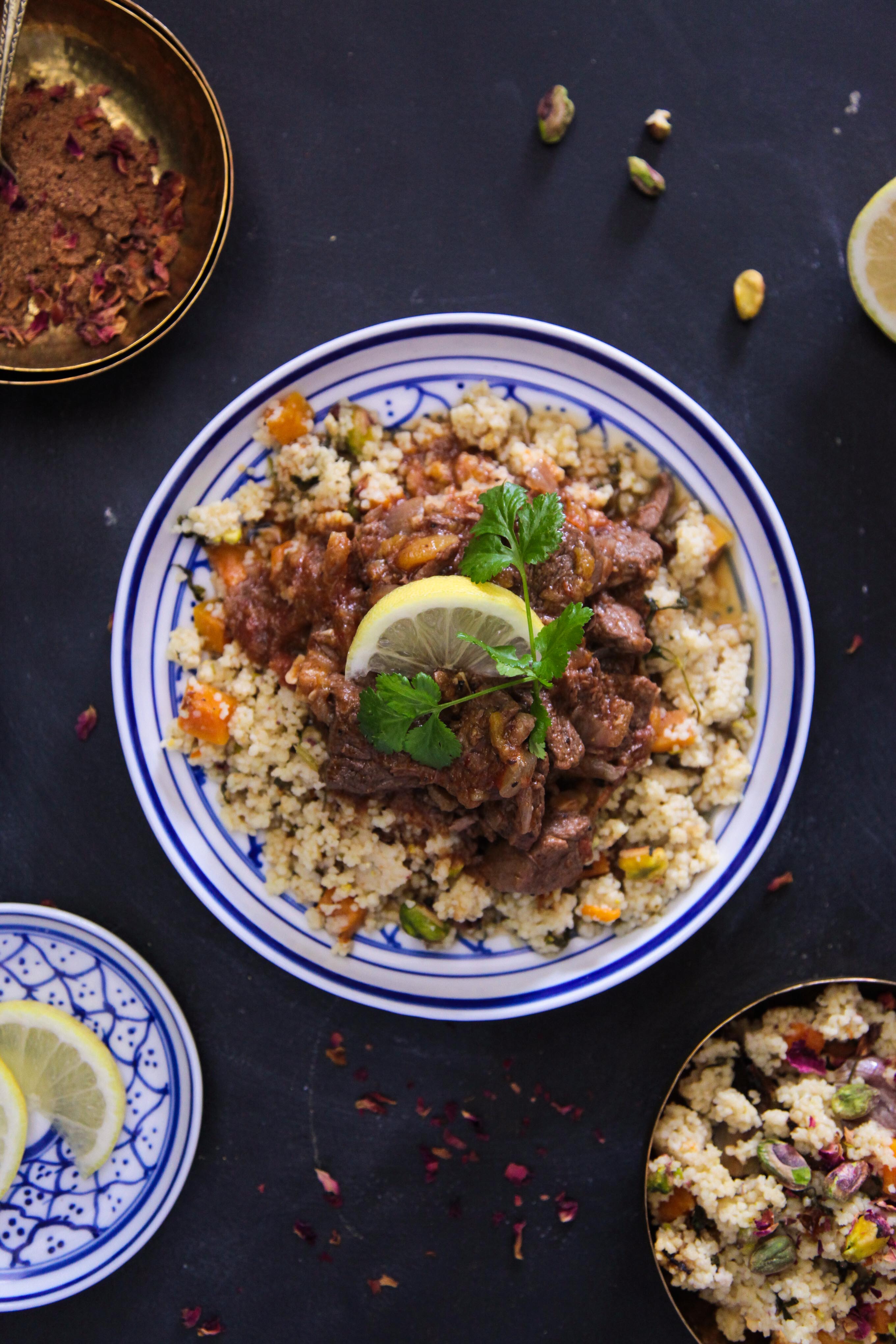 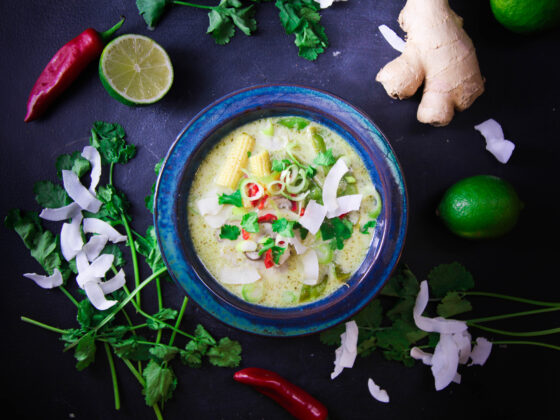 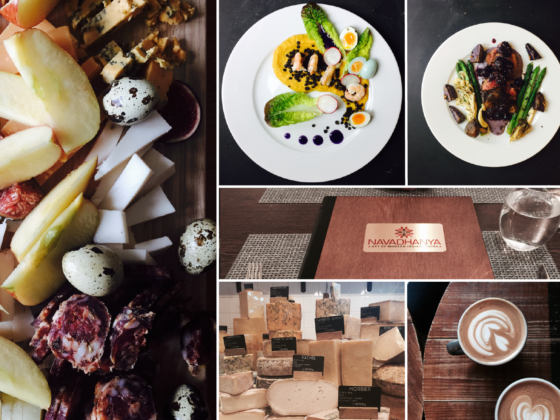