I’ve always been cooking mostly new dishes, and aside from typical comfort food like pasta or pizza, I try to experiment and play around with ingredients, techniques and plating styles. Because I do this a lot, I’ve decided to start a new series: tales from my test kitchen. My first article is about how I spent most of my weekend recreating Scottish memories with ingredients that travelled with me all the way from Edinburgh to Romania.

My aims for this new series are:

Since my boyfriend got me a sous-vide immersion circulator for Christmas, I’ve been testing and trying various dishes. Thankfully there’s also Chef Steps to provide me with great recipes and cooking techniques. I am very new to the marvels of this sous-vide tool, but so far, with very few failures, it’s been a delight.

Friday was busy and I was quite tired after a very short night’s sleep, but I am rarely alone in the house and have the kitchen all to myself. I must admit, I quite like doing all this cooking entirely alone and at my own pace. It was almost 9pm and I had two choices: watch my usual documentaries or go shopping and get cooking. As you can imagine, I chose the latter. Little did I know, Friday night is one of the best times to go shopping to my local Metro: the shelves were all full, in preparation for the usual Saturday shopping craze. I did my shopping, came back, then stayed in the kitchen until about 2am, when not only was I drained of energy, but my feet were aching and I was kind of done for the day.

What I achieved, annotated

How to continue when you’re also home alone on Saturday

Waking up relatively early on Saturday and tired from another bad night’s sleep, I decided to make my day happier and more colourful by having some of the salmon that I cured a couple of days ago with coriander seeds, lime zest, mezcal and beetroot. I felt, for the first time in a long time, that I had all the time in the world. I started plating. My salmon, some pear purée, cucumber ribbons, beetroot caviar, salmon caviar (thankfully I had that one lying in the fridge), and then, all the microgreens I had bought the night before. 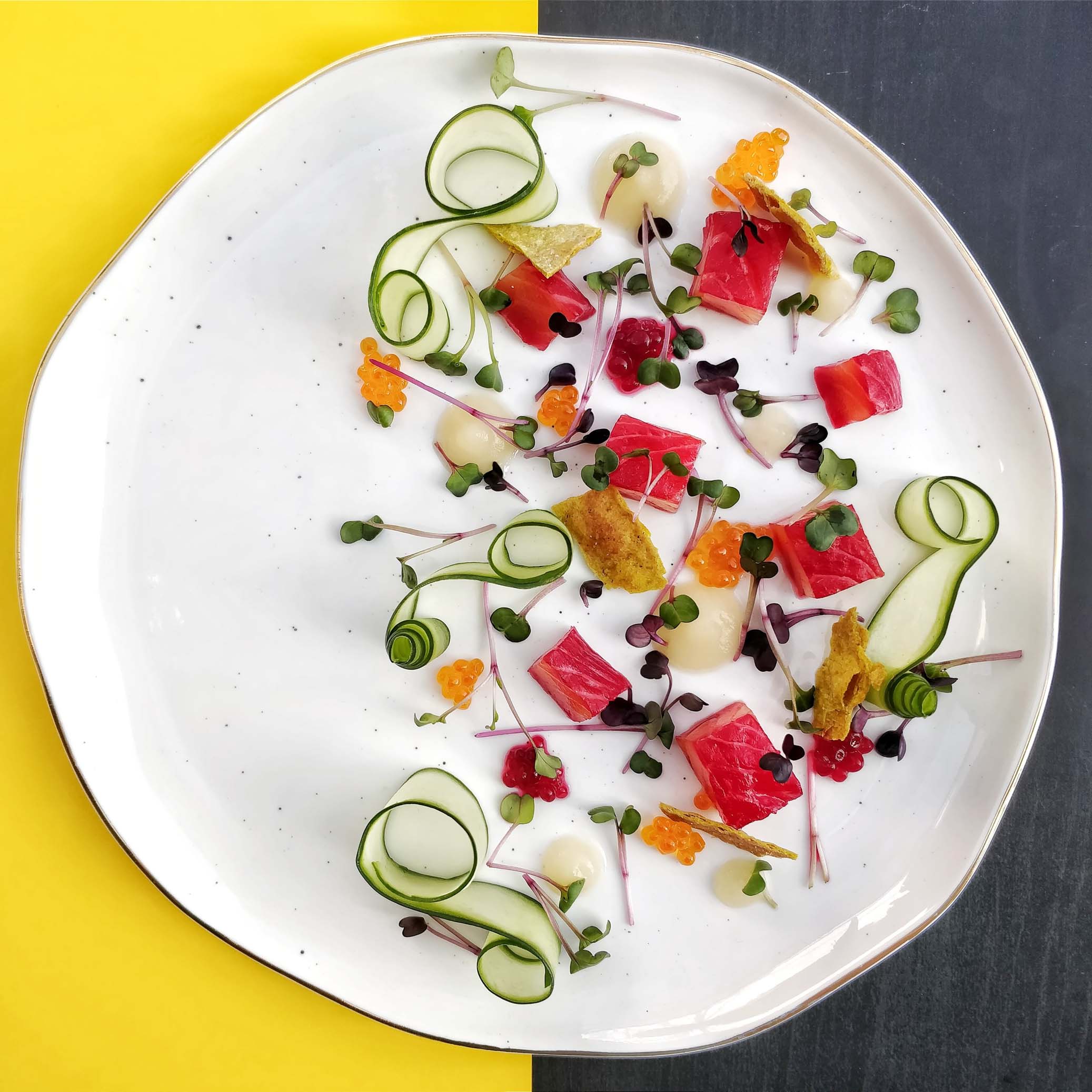 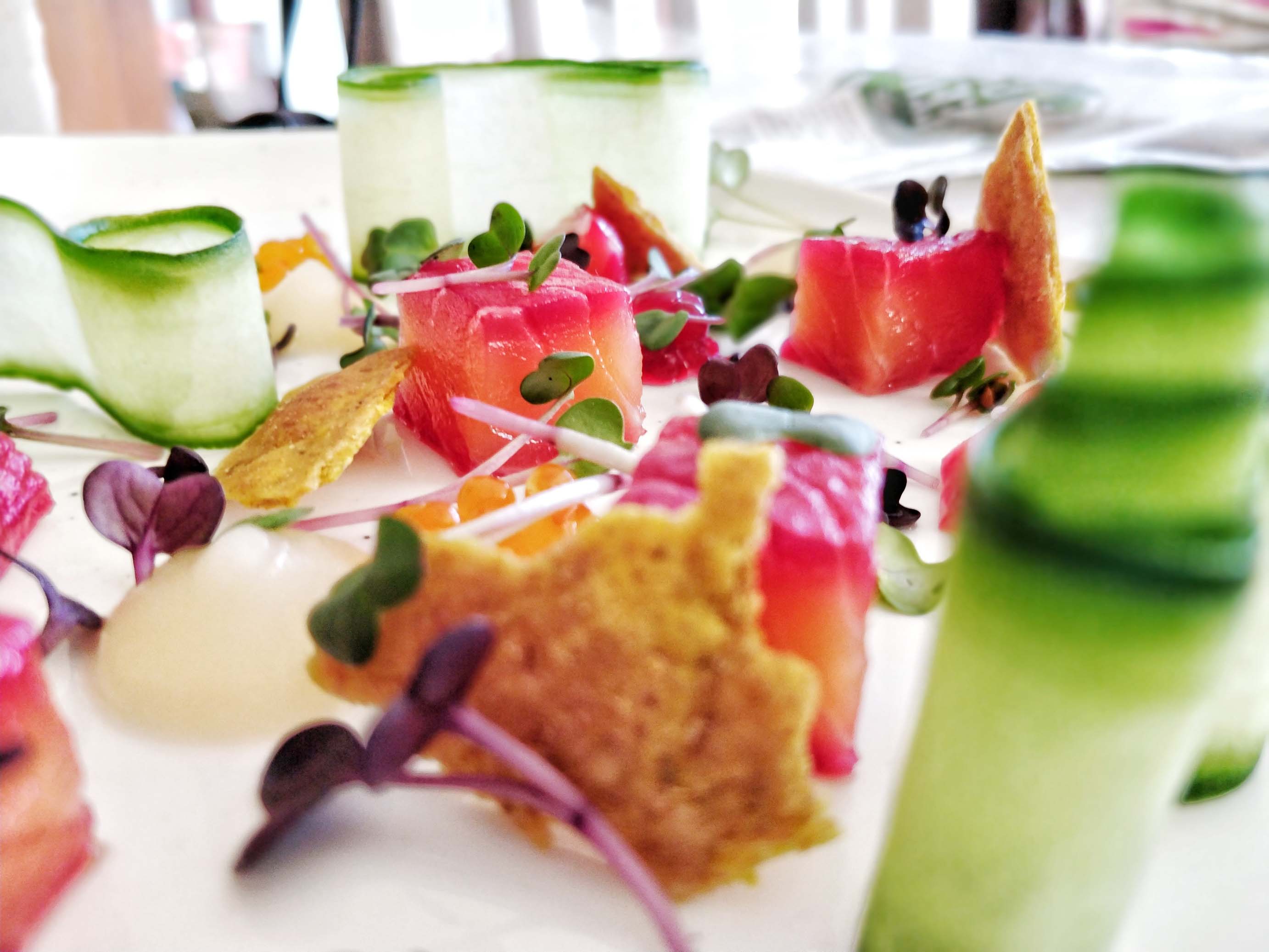 It’s hard to explain how much happiness that dish brought me, and after spending a good twenty-minutes plating it, I almost felt guilty eating it! 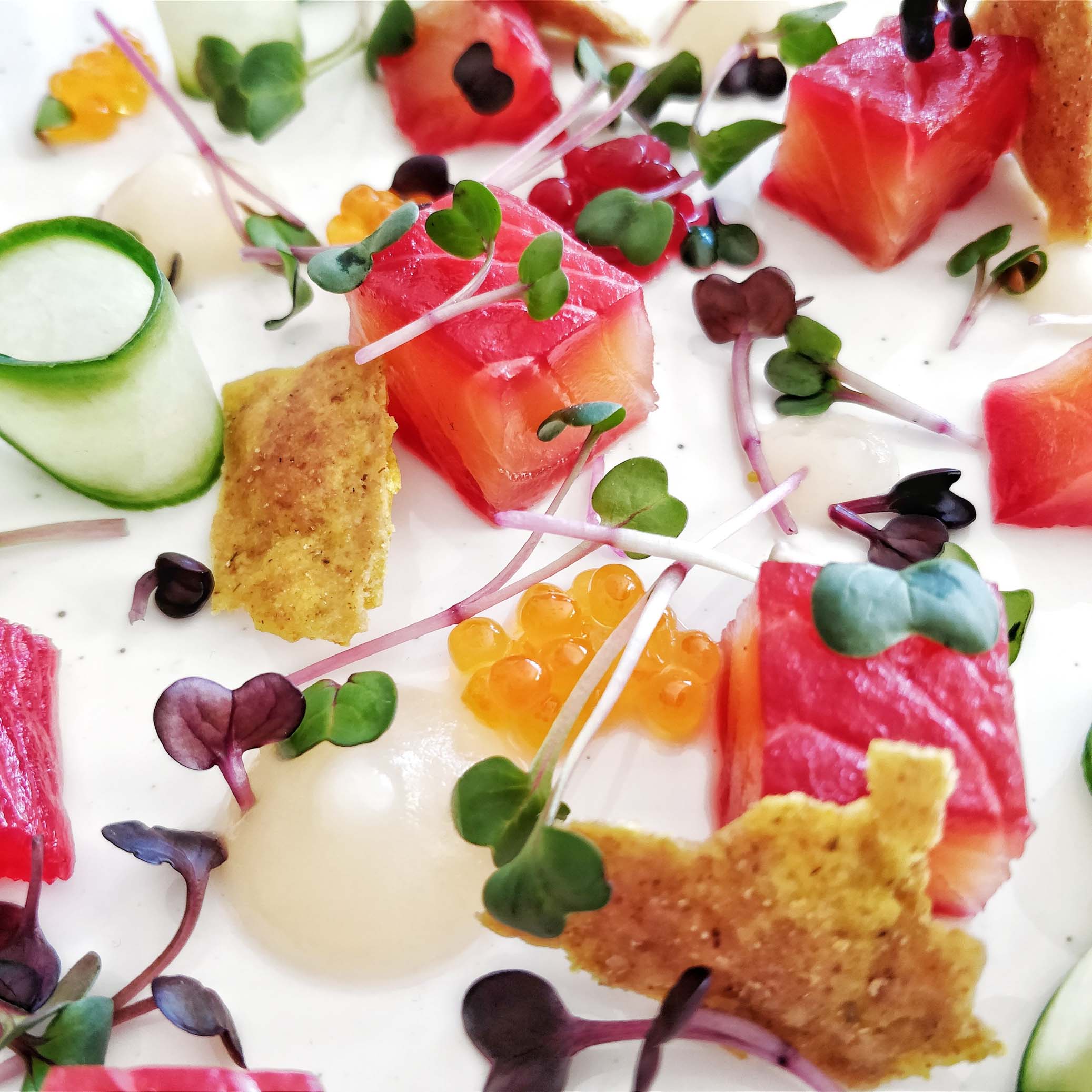 As I often do, I presumed that all the members of my family (who were coming home from their various activities) wanted to enjoy a fine-dining style dinner, so I started with lots of plans, some of which were successful, others less so.

I looked at my shopping, then decided to make a starter of fennel and apple velouté, topped with crispy black pudding cubes (from the batch I brought from Edinburgh last week). In my head, it all looked and tasted very nice. The result was, however, a mess. I cooked the soup base ingredients sous vide, planning on blending it all, adding some cream and all that jazz to make it silky and smooth. I had made a major mistake: instead of frying the garlic with some butter, I added it fresh to the fennel and apple and totally forgot to add any oil. The result was something more garlicky than garlic sauce. It tasted bad! Should I add that the texture of the blended vegetables was awful? I guess soups should just be made the classic way. 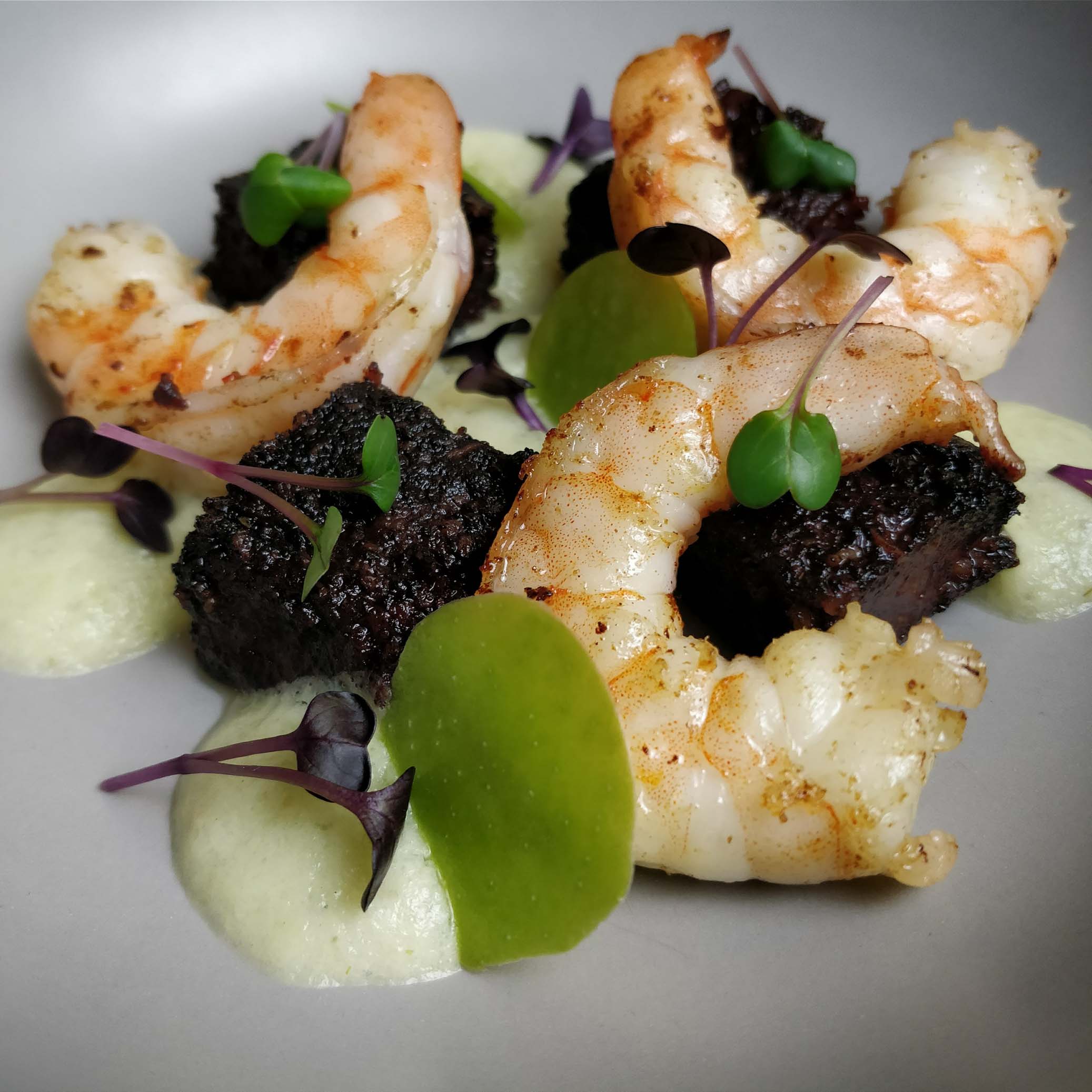 … But there’s always a plan B!

I strained the velouté wannabe and ended up with a thin liquid far from what I was initially planning. I added butter, salt and a couple of star anise, then brought it to boil. Once the star anise infused, that-soup-thing started tasting really good. At that point I was a bit down and scared that I wouldn’t be able to put anything up on the table, so I decided to experiment some more. I added some agar-agar to the soup, then placed it in my whipping siphon, loaded it, and then… A beautiful greenish foam. Win! I took out a couple of prawns that I had in the freezer, poached them, then finished them in some hot butter, cooked my black pudding cubes, and ta-da, a beautiful and delicious dish! 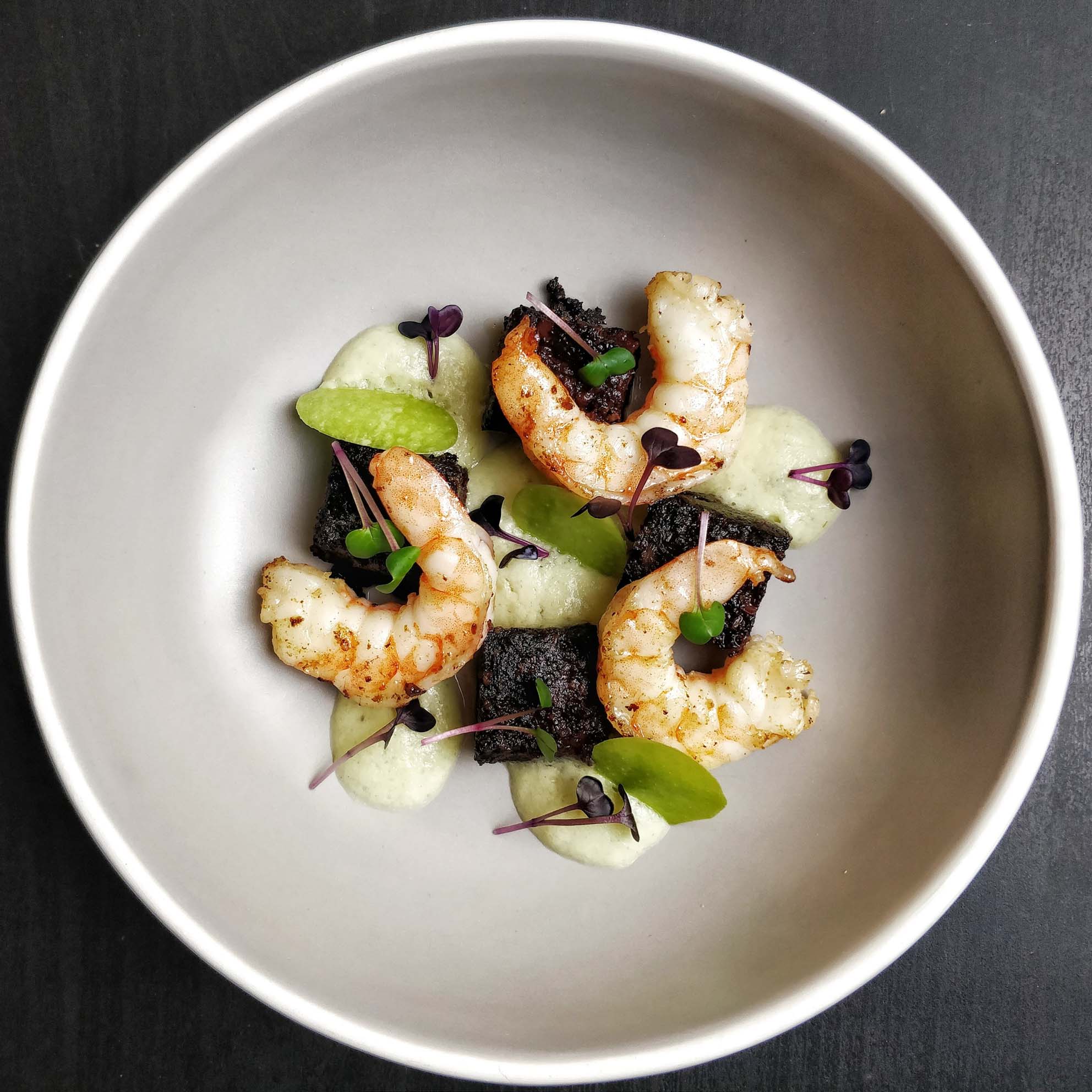 Sundays are for improvements

What I haven’t told you yet, is that after the salmon and the black pudding, prawn and fennel foam I also prepared haggis (also from the Edinburgh batch that travelled with me from Edinburgh last week). With baby carrots cooked sous vide and a somewhat disappointing puree of violet potatoes that weren’t exactly violet, and that turned out grey. There I went shopping again, to get the last couple of ingredients and recreate this classic Scottish dish, in my own ways, of course. I made a saffron and turnip purée – I added saffron mainly for the colour (and to avoid the strong taste of turmeric), then put together a whisky sauce with some good Highland single malt I had in my drinks cupboard. I then prepared my haggis croquettes and shallow fried them in a gingerbread crust. 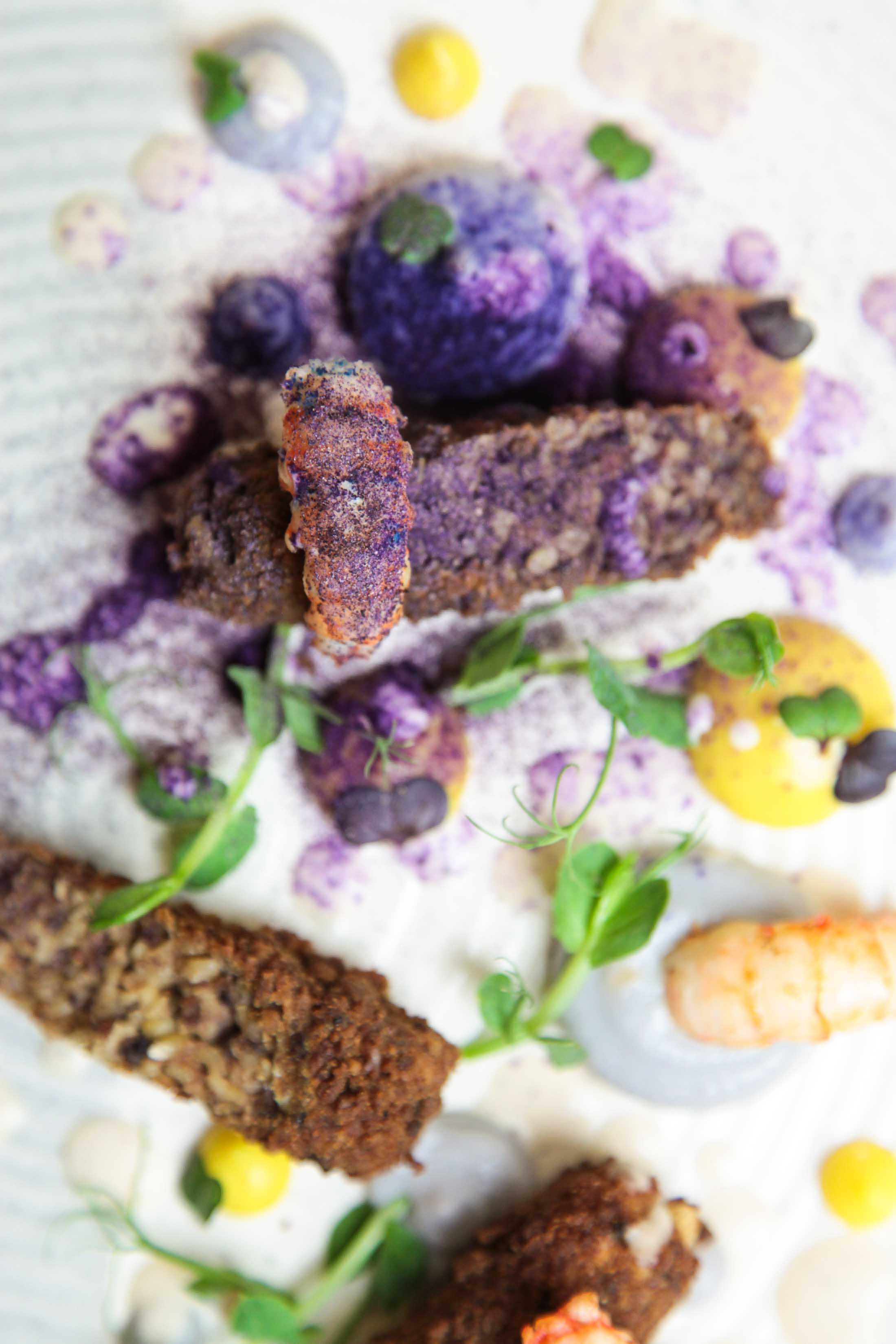 Among various ingredients, my shopping also contained some squeeze bottles and a coffee grinder that I bought to make various powders. You can imagine: I had to use them all for my dinner! I plated the purées with the tubes, then, after putting everything together, I decided to use up some of that dehydrated red cabbage and turn it into a fine powder. The dish was missing a bit of purple. And there it was, probably my prettiest dish ever! 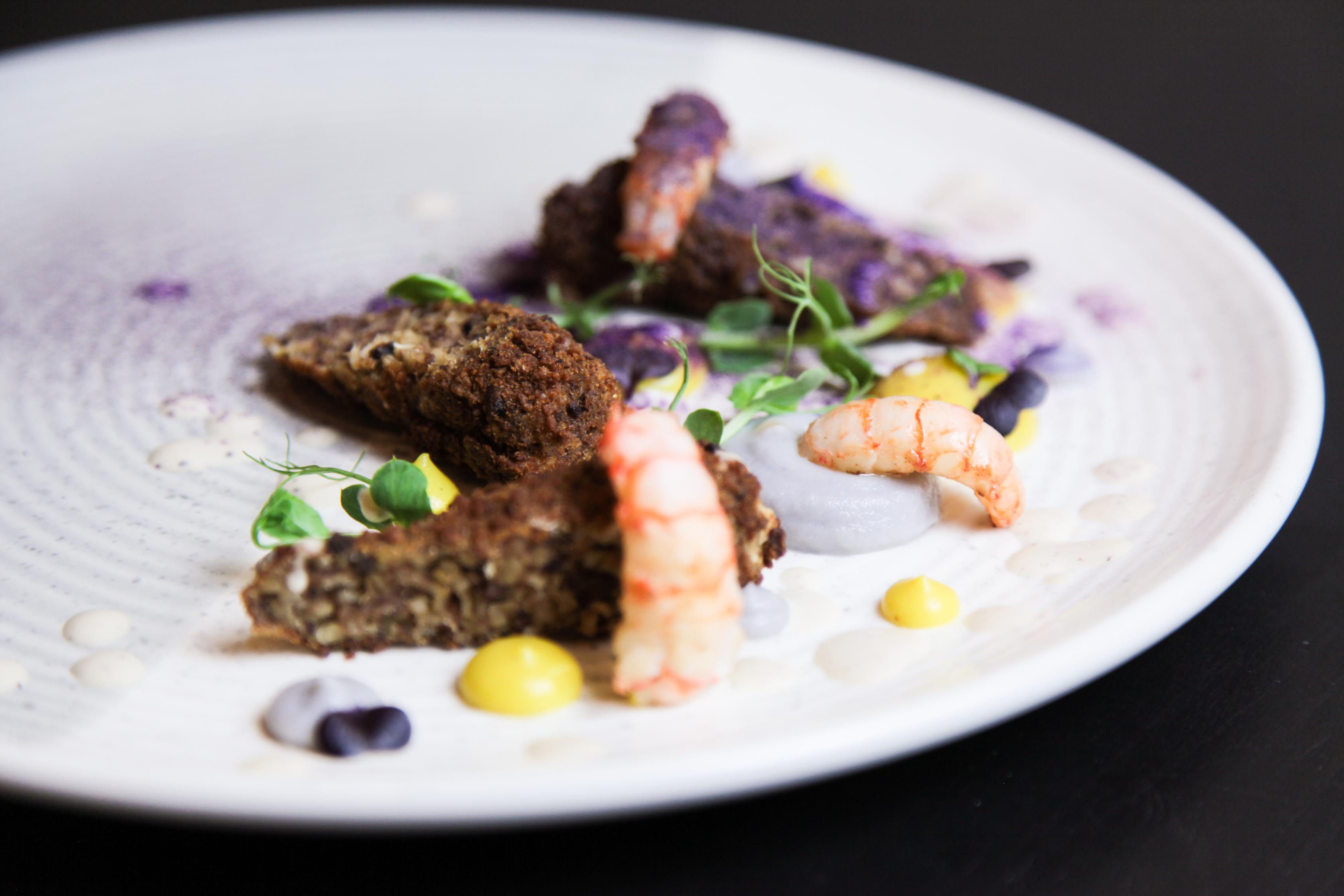 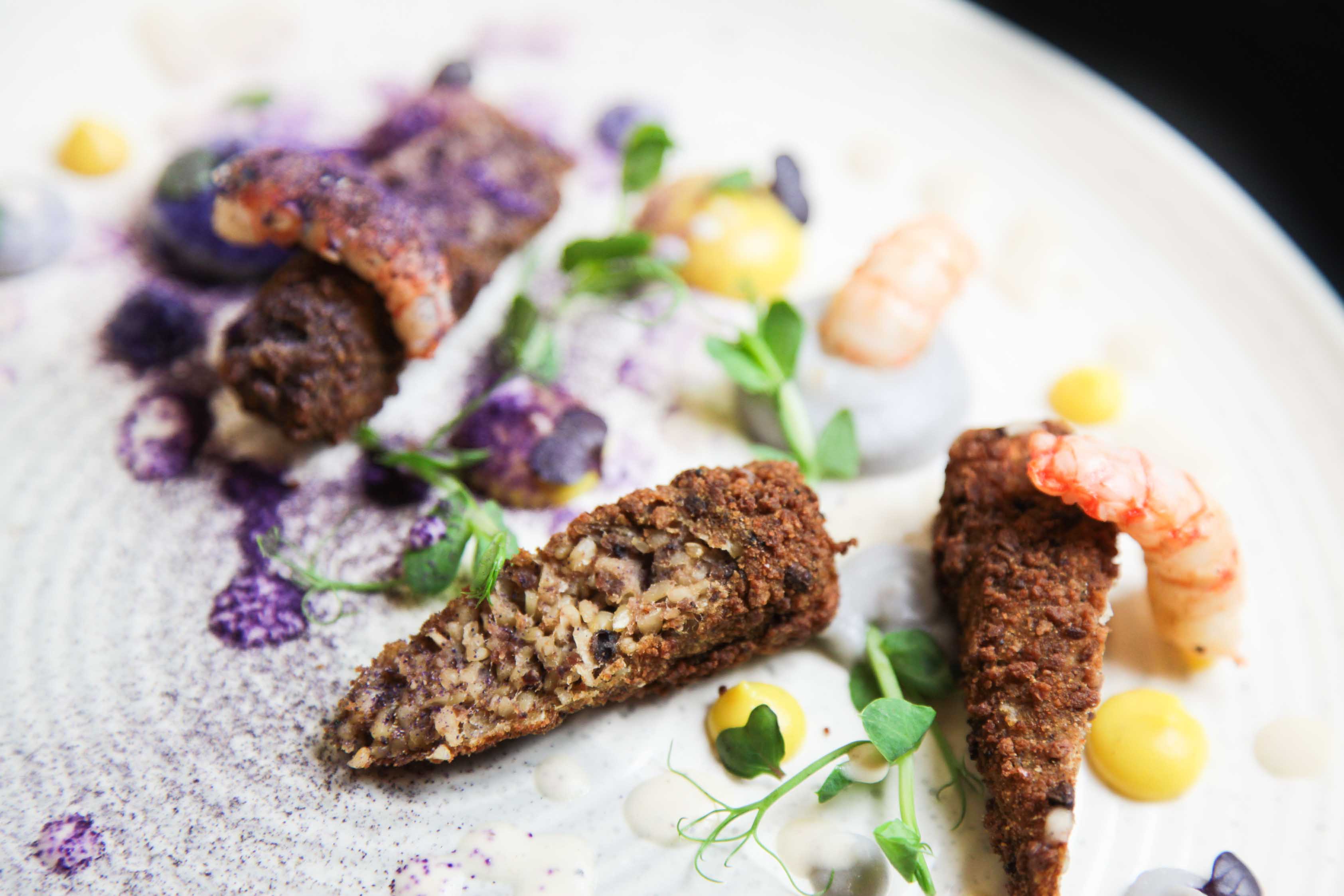 All in all, I think I spent more than fourteen hours cooking this weekend, but I don’t feel tired nor fed up. Instead, I feel refreshed, excited, and already looking forward to the next couple of days I’ll spend cooking like this! Hopefully next time it will be in my new flat in Vienna! 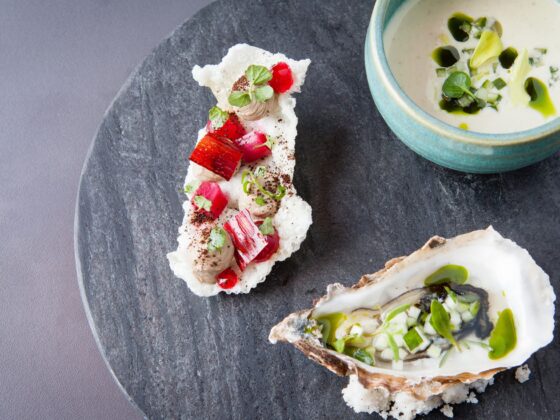 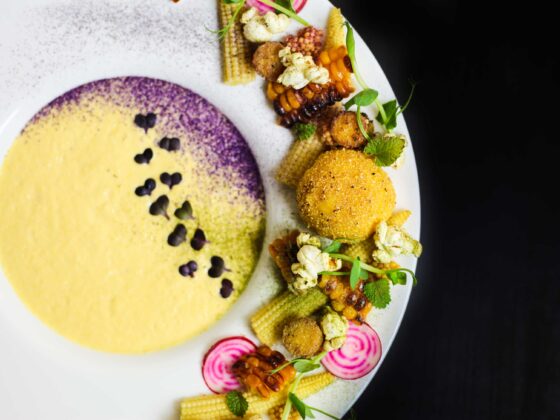 Tales from my test kitchen #2: a celebration of corn