Last week I had the great pleasure to meet Chef Sorin Cucu, head chef and owner of Mahala Restaurant. During our one-and-a-half-hour chat, he shared insights into his life and experience, talking passionately about what real food is, how his grandpa was an inspiration in his life endeavours and why he chose the contemporary Romanian theme when opening Mahala.

I started the interview asking Chef Cucu ‘how did you get here?’, and then the conversation organically developed from there. He is talkative, yet always insightful. He is passionate, humble, and to some extent a bit shy, despite his constant eagerness to share his interesting stories. I never thought these could be a chef’s traits, but perhaps Gordon Ramsay and the like gave me a wrong impression. 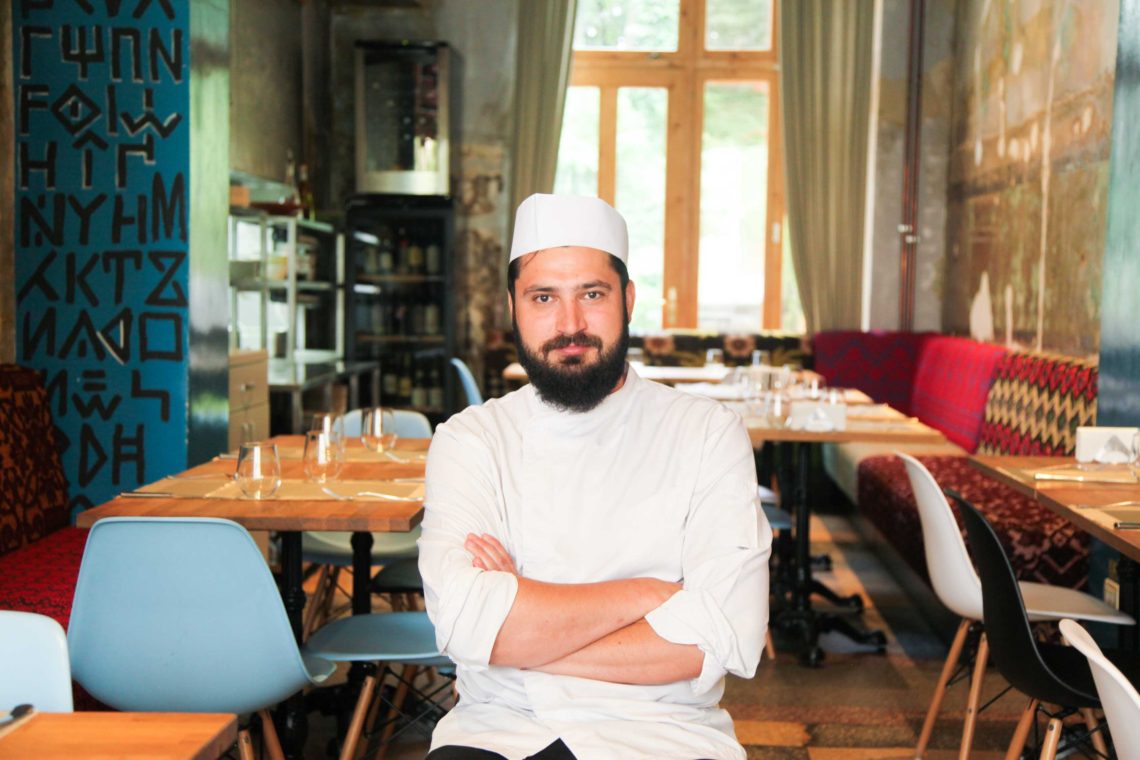 Chef Sorin Cucu’s career as a cook started when he was just seventeen. He landed in McMonis’ kitchen by chance: he was there to become a waiter, but all positions had already been filled. He still remembers the first day at work, having to sort through a gigantic pile of tarragon and get it ready for marinating. Slowly, Chef Cucu started gaining more experience: he moved on to work at Cucina, then Balthazar where he even got to cook for Nicole Kidman and Jude Law, who were in the country to film Cold Mountain. At some point, he even worked on a cruise and got a job offer in the UK.

Casa di David and how it all started

In the end, Chef Cucu traded the job in the UK for one at Casa di David, a reputable restaurant in Bucharest. He spent twelve years there, working his way up to become the restaurant’s head chef. There, he was given the chance to learn and get proper training, both abroad and in Romania. He even went to The Alain Ducasse Cooking School.

At the end of the day, cooking schools are all about the basics, like sauces and different techniques. And then it’s up to you to use them in innovative ways. 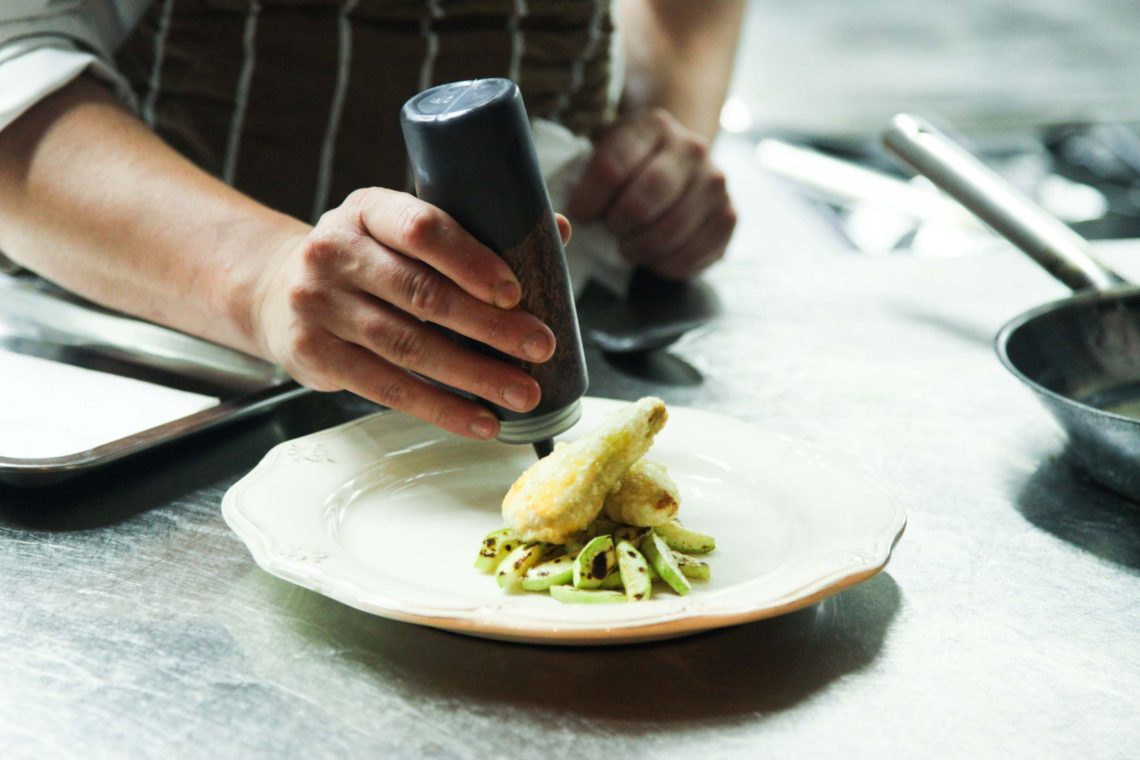 How Mahala was born

Chef Sorin Cucu opened Mahala at the end of 2015 –  the clear next step in his career as a chef. Of course, it all sounds far more poetic than it actually is, but that’s the beauty of the HoReCa business.

Starting your own restaurant makes you end up in a similar situation to being stuck on a boat without paddles, in the middle of a lake and needing to reach the shore. 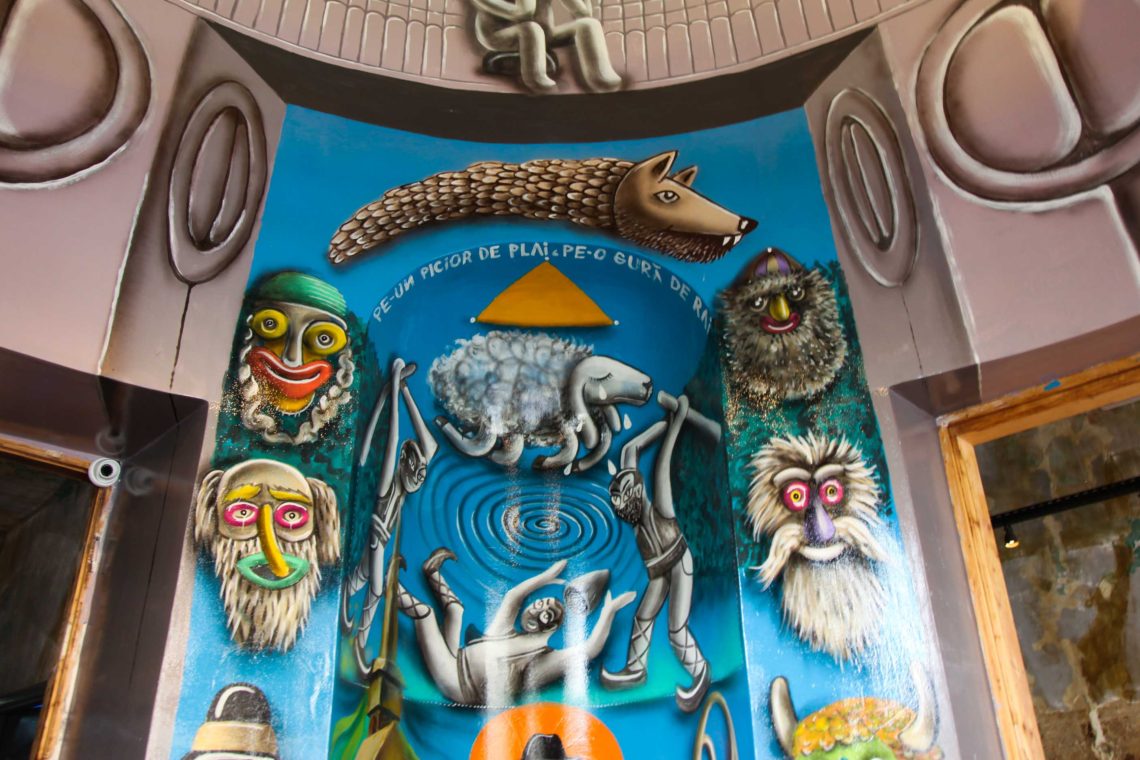 His grandfather, a role model

Chef Sorin Cucu’s grandfather worked his entire life to open a soda water shop. He bought the land, built it and then communism took it away – he ended up being an employee of his own shop. After communism, he fought until he was in his eighties and, with all the hard work he got his shop back. His entrepreneurial spirit and constant drive pushed Chef Cucu further. His grandfather now has his own space on the walls of the restaurant. 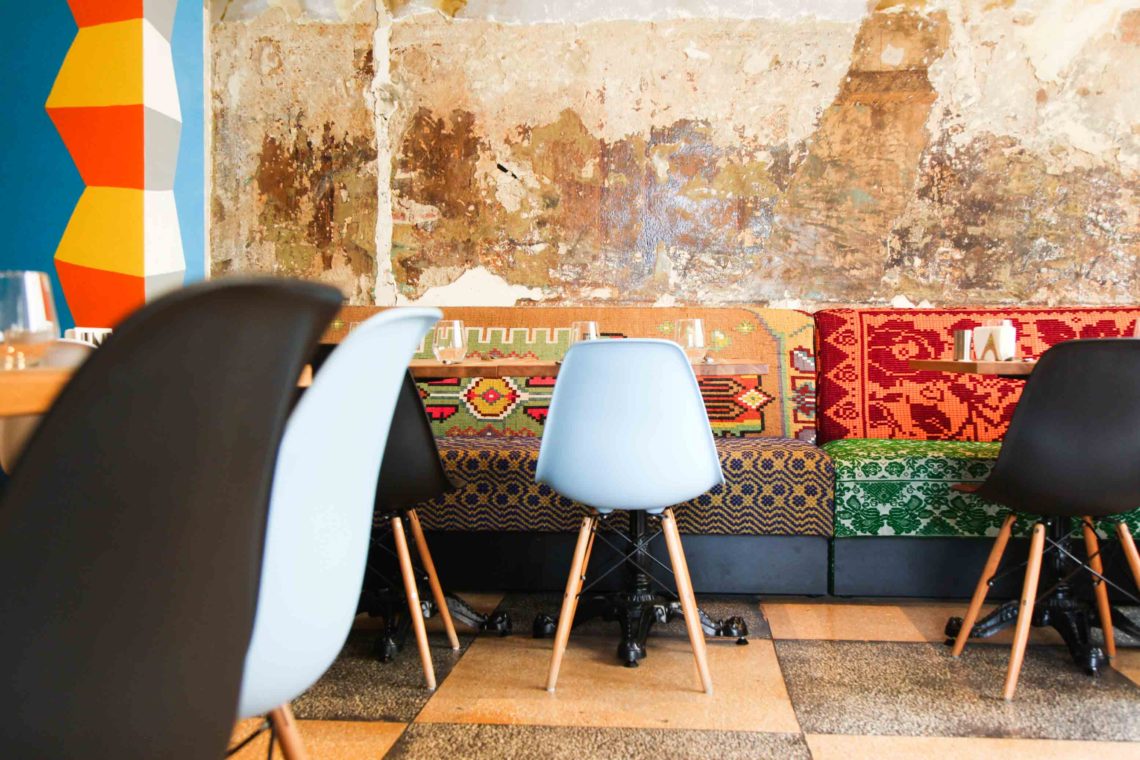 Romanians have lately been going through a phase of rediscovery of their culture, traditions, flavours and customs, that the had forgotten under Ceausescu and the post-communist Americanisation. Chef Sorin Cucu is among the people who encourages this through clear passion. In reality, Mahala is more than just a contemporary take on the Romanian culture: all the flavours, delicate and subtle, transposed from Chef Cucu’s childhood, are built with mainly local ingredients.

Bucharest foodie, a reality or a paradox?

‘Bucharesters are not connoisseurs, it’s just a bubble where we all think we know, but in reality, we keep eating sandwiches’, says Chef Cucu, adding that the post-communist era destroyed self-discipline, and emancipation led to a lot of us avoiding home-cooking. He thinks that eating has become a way to fill up your stomach, more than anything else.

A little pessimistic when I asked him how we can change the mentalities, Chef Cucu pointed out that there are large masses that are happy to learn, yet very few places where food is cooked properly. In case you haven’t guessed, Mahala is one of them.

What real food really is all about

Chef Sorin Cucu continues: ‘Everyone says ‘I know how to cook’. To make a soup, they throw some chopped carrots, onions and parsnips into a boiling pot of water, they add salt and flavourings, and, 20 minutes later, done! No, a soup cannot take 20 minutes to cook. You start by boiling the bone, and then you use that broth as a base, sauté the vegetables and make the rest. This takes a whole day. And then there are restaurants that bring a freshly cooked soup in 20 minutes – they add some tomato sauce, some mono-sodium-glutamate and other flavourings and serve it to you.’

Taste is training. To be able to eat well, you need to taste real, well prepared food.

Getting the most out of every ingredient

‘In reality, to be healthy, you need to eat specific foods and learn how to get the most out of every ingredient. For example, a good demi-glace, which takes hours to cook, contains a lot of collagen, which could prevent conditions like arthritis, for which we wouldn’t need to take supplements anymore. But then, because you don’t want to cook at home, you go to the restaurant and rely on the fact that they should know what real food is. However, what you end up receiving is a demi-glace cooked in ten minutes and thickened with starch, that did not have enough time to extract any collagen from the animal bone.’ 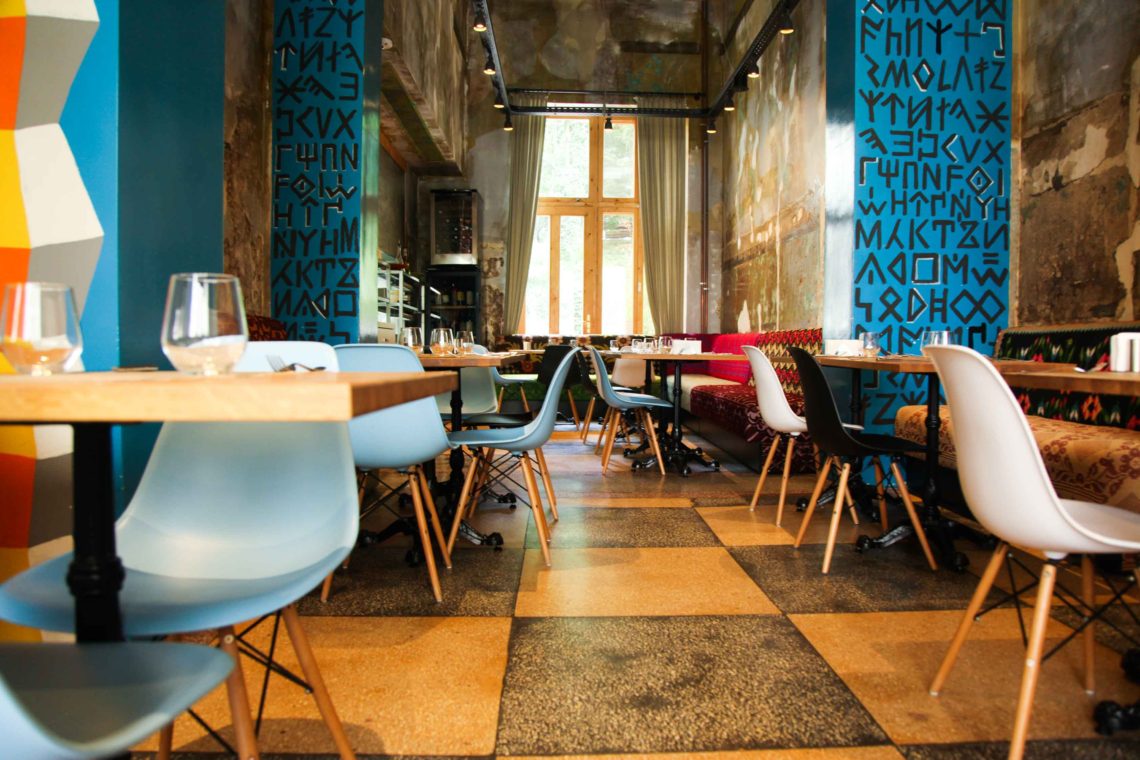 At his restaurant, Chef Cucu promises real food that is never too heavy. He serves light fish and ‘deep’ meat, rich in flavour and accompanied by one of those day-long sauces made naturally, without adding ingredients to speed up the process. He promises dishes that make sense in terms of flavour profile and that do not contain unnecessary additions, like out-of-context microgreens or edible flowers that add nothing to the dish itself. Chef Cucu promises simple, high quality food – the kind that pleases every one of your taste buds, that the chef builds with passion and a lot of hard work.

After dining at Mahala numerous times, I know that every dish in his menu will be great, but, thankfully, now I also know more about the love and passion that he puts when creating his food. Thank you, Chef! 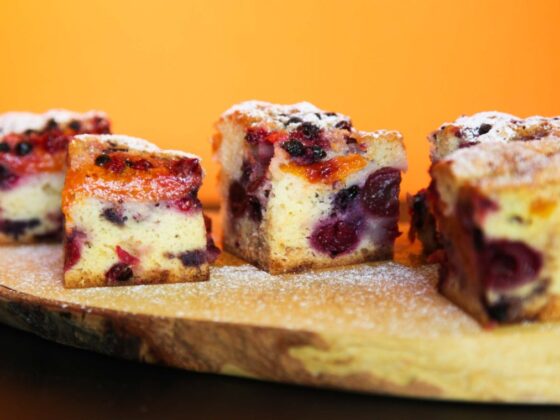 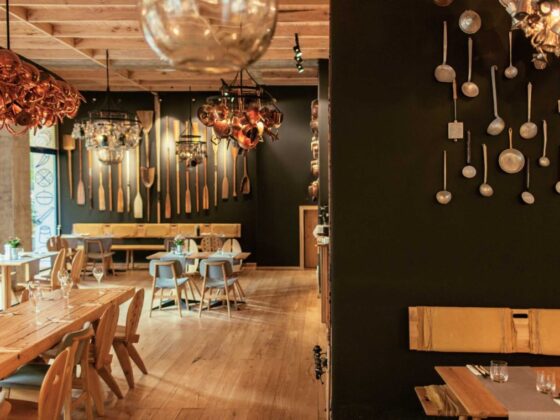 Sardin, Bucharest – how to feel the love in every dish